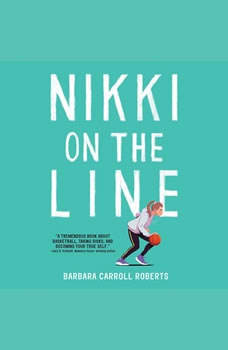 Nikki on the Line

Nikki wants to be a basketball star... but between school stress, friend drama, and babysitting woes, will she be able to make it on her new team? Judy Blume meets Mike Lupica in this pitch-perfect, action-packed, and funny novel. Thirteen-year-old Nikki Doyle's dreams of becoming a basketball great feel within reach when she's selected to play on an elite-level club team. But in a league with taller, stronger, and faster girls, Nikki suddenly isn't the best point guard. In fact, she's no longer a point guard at all, which leaves her struggling to figure out who she is and how she fits in.The stress piles on as Nikki's best friend spends more and more time with another girl on the team, and when her science teacher assigns a family tree project that will be impossible to complete unless Nikki reveals her most embarrassing secret. As if that's not enough to deal with, to cover the costs of her new team, Nikki has agreed to take care of her annoying younger brother after school to save money on childcare. As the stakes rise on the basketball court, at school, and at home, Nikki's confidence plummets. Can she learn to compete at this new, higher level? And how hard is she willing to work to find out?