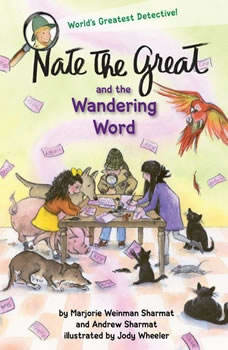 Nate the Great and the Wandering Word

Join the world's greatest detective, Nate the Great, as he solves the mystery of the missing word! Perfect for beginning readers and the Common Core, this long-running chapter book series will encourage children to problem-solve with Nate, using logical thinking to solve mysteries!

WHAT DOES A STRANGE, LONG, MADE-UP WORD SOUND LIKE?

Esmeralda came up with the perfect name for Rosamond's pet concert. But she lost the pink paper where she wrote the word--and she can't remember what it is. Nate the Great and his dog, Sludge, take on the unusual case, and they are soon braving pink papers and barking, oinking, and talking pets. Will Nate and Sludge find the word in time for the show to go on?

Praise for the Nate the Great Series:

"Nate, Sludge, and all their friends have been delighting beginning readers for years."-Kirkus Reviews

"They don't come any cooler than Nate the Great."-The Huffington Post