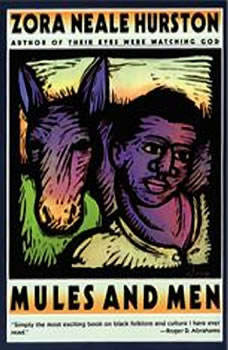 "Simply the most exciting book on black folklore and culture I have ever read." --Roger D. AbrahamsMules and Men is the first great collection of black America's folk world. In the 1930's, Zora Neale Hurston returned to her "native village" of Eatonville, Florida to record the oral histories, sermons and songs, dating back to the time of slavery, which she remembered hearing as a child. In her quest, she found herself and her history throughout these highly metaphorical folk-tales, "big old lies," and the lyrical language of song. With this collection, Zora Neale Hurston has come to reveal'and preserve'a beautiful and important part of American culture.Zora Neale Hurston (1901-1960) was a novelist, folklorist, anthropologist and playwright whose fictional and factual accounts of black heritage are unparalleled. She is also the author of Tell My Horse, Their Eyes Were Watching God, Dust Tracks on a Road, and Mule Bone. Ruby Dee, a member of the Theatre Hall of Fame, starred on Broadway in the original productions of A Raisin in the Sun and Purlie Victorious, and was featured in Spike Lee's Do the Right Thing. She is also an award-winning author and the producer of numerous television dramas.

The bestselling author of Yellow Crocus returns with a haunting and tender story of three women returning to the plantation they once called home.Oberlin, Ohio, 1868. Lisbeth Johnson was born into privilege in the antebellum South. Jordan Freedman w...

Passing meets The House of Mirth in this “utterly captivating” (Kathleen Grissom, New York Times bestselling author of The Kitchen House) historical novel based on the true story of Anita Hemmings, the first black student to attend Vassa...

In one of the most acclaimed novels in recent memory, Edward P. Jones, two-time National Book Award finalist, tells the story of Henry Townsend, a black farmer and former slave who falls under the tutelage of William Robbins, the most powerful man i...

An epic account of one remarkable woman's quest for justice from the New York Times bestselling author of The Widow of the South and A Separate Country.In the years following the Civil War, Mariah Reddick, former slave to Carrie McGavock--the "Wid...