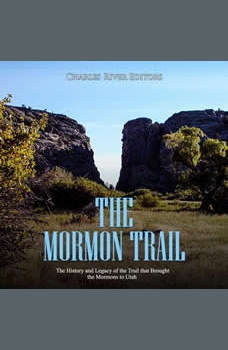 Mormon Trail, The: The History and Legacy of the Trail that Brought the Mormons to Utah

Among all the various figures in 19th century America who left controversial legacies, it is hard to find one as influential as Joseph Smith (1805-1844), the founder of The Church of Jesus Christ of Latter-Day Saints, Mormonism, and the Latter-Day Saint movement. Revered as a prophet on the level of Moses by some, reviled as a perpetrator of large-scale fraud by others, what everyone can agree on is that Joseph Smith founded a religious movement that played a crucial role in the settlement of the West, especially in Utah.

Smith’s death was one of the catalysts for the Mormons’ great migration to Utah, and today that state and the Mormons are virtually synonymous. To this day, Mormons still form a majority of the population, and members of the Church have prominent political and economic roles. Both of Utah’s U.S. Senators, Mike Lee and Mitt Romney, are Mormons, as is Governor Gary Herbert. The story of the Mormon pioneers and the trail they trod is one of the great stories of the westward expansion of the United States. Frenchman Hyppolite Taine wrote of the migration in romantic terms in the 1860s: “Since the exodus of the Israelites there is no example of so great a religious emigration executed across such great spaces in spite of such obstacles, by so great a number of men, with so much order, obedience, courage, patience, and devotion…But the mainsprings of this great will was faith. Without it men would not have done such things. These exiles thought that they were founding the city of God, the metropolis of mankind. They considered themselves the renovators of the world. Let us remember our youth, and with what force an idea...merely by the fact that it seems good and true to us hurls us forward despite natural egotism, daily weakness, habits that we have contracted, surrounding prejudices, and accumulated obstacles! We don’t know of what we are capable.”