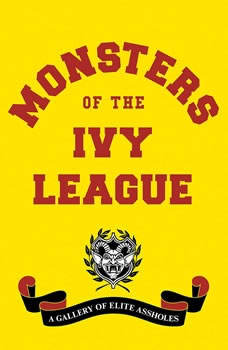 Monsters of the Ivy League

First stop: Harvard or Yale or Princeton or...Next stop: Wall Street riches...house on the Vineyard...vineyard with a house...a Nobel Prize...Not so fast.Everybody knows that the schools of the Ivy League-universally touted as the pinnacle of American higher education-have graduated countless political leaders, corporate titans, and global power brokers. But did you know these schools have also produced murderers, warmongers, traitors, plagiarists, slave traders, pederasts, and every other variety of moral reprobate?Whether you're a high school student grinding away in the hope of gaining admission to one of these institutions, a parent propelling a child toward Ivy glory, a current Ivy League undergraduate wondering "What the hell is this place?"-or even an Ivy League alum, professor, administrator, or dropout-this book was written specifically for you. As a warning. Because there are certain things-monstrous things-that go unmentioned in the catalog, campus tour, or employment package.And if your Ivy League application was rejected, here's compelling and consoling evidence of how lucky you are.