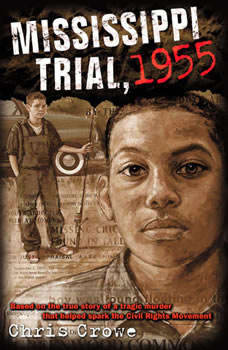 Winner of the 2003 International Reading Association Award for Young Adult Novel. This gripping story is based on the true events of the murder of Emmett Till, one of the nation's most notorious crimes that helped spark the Civil Rights Movement.


At first Hiram is excited to visit his hometown in Mississippi. But soon after he arrives, he crosses paths with Emmett Till, a black teenager from Chicago who is also visiting for the summer. Hiram sees firsthand how the local whites mistreat blacks who refuse to "know their place." When Emmett's tortured dead body is found floating in a river, Hiram is determined to find out who could do such a thing. But what will it cost him to know?

It is 1848.On one side of the Mason-Dixon Line lives fifteen-year-old Willow, her master’s favorite servant. She’s been taught to read and has learned to write. She is permitted to spend much of her time riding her horse to the riverbank...

"What you need to do," Kevin said, "is publish a book called Rules for Every Thing.""If I publish a book," Duke said, "I'm going to call it Handbook for Boys."Growing up is tough...really tough.But what if you had a handbook that told you how to fi...

Mann lost his younger brother, Jason, two years ago–an innocent bystander in a shooting on his own porch. These murders are a frequent occurrence in Mann’s neighborhood. They’re so common, in fact, that he and his best friend, Kee-...

When I Was the Greatest
by Jason Reynolds

In Bed Stuy, New York, a small misunderstanding can escalate into having a price on your head—even if you’re totally clean. This gritty, triumphant debut captures the heart and the hardship of life for an urban teen.A lot of the stuff th...

This is the highly anticipated second novel by Angie Thomas, the author of the #1 New York Times bestselling, award-winning The Hate U Give.Sixteen-year-old Bri wants to be one of the greatest rappers of all time. Or at least win her...

47 is the first young adult novel to be written by bestselling author Walter Mosley. A master storyteller, Mosley deftly mixes speculative and historical fiction in this daring novel. Set in a plantation, 47 (a young slave boy) is growing up under...

This riveting novel in verse, perfect for fans of Jacqueline Woodson and Toni Morrison, explores American history and race through the eyes of a teenage boy embracing his newfound identity   Connor’s grandmother leaves his dad a letter wh...

The Hate U Give
by Angie Thomas