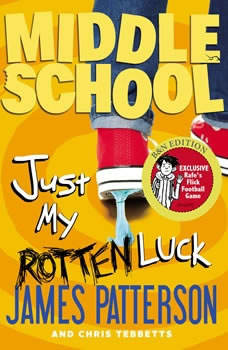 TOUCHDOWN! James Patterson will have kids busting out laughing as they follow lovable bad-boy Rafe's struggles to score big on the field--and in the social scene! In this seventh Middle School episode, Rafe heads back to the place his misadventures began: the dreaded Hills Village Middle School, where he's now being forced to take "special" classes.. He also finds himself joining the school's football team--alongside his main tormenter, Miller the Killer! But Rafe has grand plans for a better year: First, he decides to start a super-secret art project that's sure to rock the school. Then, if Rafe manages to make a play to save his team, he might have to deal with something completely new: popularity!