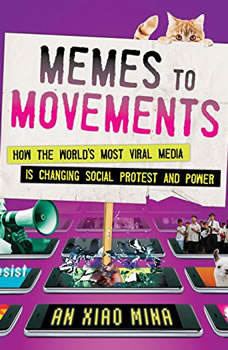 Memes to Movements: How the World's Most Viral Media Is Changing Social Protest and Power

A global exploration of the internet meme as an agent of pop culture, politics, protest, and propaganda on and offline, and how they will save or destroy us all

Internet memes are one of today's most unexpectedly potent and creative forms, born of digital culture and -- more and more -- in dialogue with real life. A photo of protesters, for example, in Ferguson, Missouri raising their hands in a gesture of resistance gets replicated eight thousand miles away in Hong Kong, where dissidents are fighting for voting rights. Or a viral video of a presidential candidate-elect can become the impetus for an international march of women in pink "pussy-hats," itself a viral meme come to life. In the long, winding road from grumpy cat photos, internet memes have become a central concept of modern protest.

Using social media-driven movements as her guide, technologist and digital media scholar An Xiao Mina unpacks the mechanics of memes and how they operate to reinforce, amplify, and shape today's politics. She finds that the "silly" stuff of meme culture -- the photo remixes, the selfies, the Youtube songs and the pun-tastic hashtags -- are fundamentally intertwined with how we find and affirm one another, direct attention to human rights and social justice issues, build narratives, and make culture. Crucially, she reveals how in parts of the world where public dissension is downright dangerous, memes can belie contentious political opinions that would incur drastic consequences if expressed outright. And further, she examines the future of internet memes as tools in both anti-authoritarian progressive circles and government propaganda.

Memes to Movements unveils the transformative power of memes, for better and worse. In a time when our movements are growing more complex and open-ended, Mina brings a fresh and sharply innovative take on the media discourse.

At long last, America's most notorious political operative has released his operating manual! A freedom fighter to his admirers, a dirty trickster to his detractors, the flamboyant, outrageous, articulate, and extraordinarily well-dressed Roger Sto...

The story of how a noted tech venture capitalist, an early mentor to Mark Zuckerberg and investor in his company, woke up to the serious damage Facebook was doing to our society and set out to try to stop it.If you had told Roger McNamee even three ...