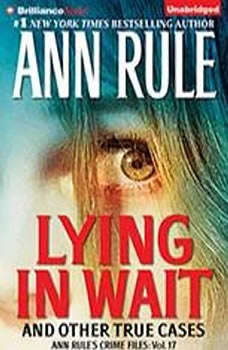 Ann Rule presents another collection of fascinating and disturbing true-crime stories—drawn from her real-life personal files—in this seventeenth volume in the #1 New York Times bestselling Crime Files series.Three decades ago, Jackie Schut was considered one of the most prolific “baby sellers” in the country. She traveled all over the US, murdered women who had just borne babies, and then stole their infants. She is still imprisoned in the South.A lovely, vibrant woman in San Antonio was found dead in a vacant lot. Her mother, a popular local realtor, never stopped looking for her killer. Just months ago, a truly unlikely suspect was found many states away. At last, the seemingly impossible case to solve had answers no one ever considered.On Christmas Day three years ago, two grandparents, their son, his wife, their two small boys, their daughter, and her boyfriend gathered to celebrate the holiday. For reasons that are still almost impossible to contemplate, the sister and her boyfriend shot and killed everyone in the room.In these chilling true stories, Ann Rule reveals the dark underside of the American family unit—together and torn apart. Her unforgettable accounts will intrigue you, and once again prove the obvious: that Rule is “America’s best true-crime writer” (Kirkus Reviews).