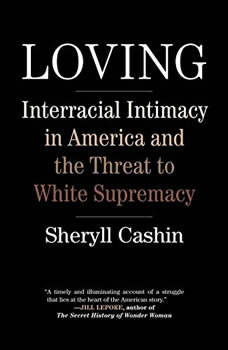 Loving: Interracial Intimacy in America and the Threat to White Supremacy

How interracial love and marriage changed history, and may soon alter the landscape of American politics.

Loving beyond boundaries is a radical act that is changing America. When Mildred and Richard Loving wed in 1958, they were ripped from their shared bed and taken to court. Their crime: miscegenation, punished by exile from their home state of Virginia. The resulting landmark decision of Loving v. Virginia ended bans on interracial marriage and remains a signature case—the first to use the words “white supremacy” to describe such racism.

Drawing from the earliest chapters in US history, legal scholar Sheryll Cashin reveals the enduring legacy of America’s original sin, tracing how we transformed from a country without an entrenched construction of race to a nation where one drop of nonwhite blood merited exclusion from full citizenship. In vivid detail, she illustrates how the idea of whiteness was created by the planter class of yesterday and is reinforced by today’s power-hungry dog-whistlers to divide struggling whites and people of color, ensuring plutocracy and undermining the common good.

Cashin argues that over the course of the last four centuries there have been “ardent integrators” and that those people are today contributing to the emergence of a class of “culturally dexterous” Americans. In the fifty years since the Lovings won their case, approval for interracial marriage rose from 4 percent to 87 percent. Cashin speculates that rising rates of interracial intimacy—including cross-racial adoption, romance, and friendship—combined with immigration, demographic, and generational change, will create an ascendant coalition of culturally dexterous whites and people of color.

Loving is both a history of white supremacy and a hopeful treatise on the future of race relations in America, challenging the notion that trickle-down progressive politics is our only hope for a more inclusive society. Accessible and sharp, Cashin reanimates the possibility of a future where interracial understanding serves as a catalyst of a social revolution ending not in artificial color blindness but in a culture where acceptance and difference are celebrated.

“A wonderfully vivid portrait of the man behind Sherlock Holmes . . . Like all the best historical true crime books, it’s about so much more than crime.”—Tana French, author of In the WoodsOne of USA Today’s “Five...

The gripping story of one American lawyer’s obsessive crusade—waged at any cost—against Big Oil on behalf of the poor farmers and indigenous tribes of the Amazon rainforest.Steven Donziger, a self-styled social activist and Harvard...

The Philosophy, Practice, and Science of Crime Scene Investigation
by Robert C. Shaler

The director of the Forensic Science Program at Pennsylvania State University, Professor Robert C. Shaler leads a comprehensive study of the intricacies of an intriguing, and always topical, science. In these lectures, Shaler imparts a clear underst...

A noble profession is facing its defining moment. From law schools to the prestigious firms that represent the pinnacle of a legal career, a crisis is unfolding. News headlines tell part of the story-the growing oversupply of new lawyers, widespread...

Law is fundamental to human society, and is one of the grand themes of Holy Scripture. Dr. John Warwick Montgomery taught the full-year course in Jurisprudence - the Philosophy of Law - at the University of Bedfordshire in England. Here is the full ...

Win Your Case
by Gerry Spence

What's true for training great trial lawyers is true for all winning presentors. According to renowned trial attorney and bestselling author Gerry Spence, presenting a case before decisionmakers is not simply a technique but an occasion for summonin...

Thirty years after Scott Turow entered law school comes an all new unabridged production of this classic with a special introduction by and interview with the authorONE L, Scott Turow's journal of his first year at law school and a bestseller when i...

An urgent expose of the mental health crisis in our courts, jails, and prisons. America has made mental illness a crime. Jails in New York, Los Angeles, and Chicago each house more people with mental illnesses than any hospital. As many as half of ...

There's never been a better time for buying rental properties—interest rates are low, and credit is more freely available to those who want to buy and invest. But where does one begin? With more than twenty-plus years of experience in real es...