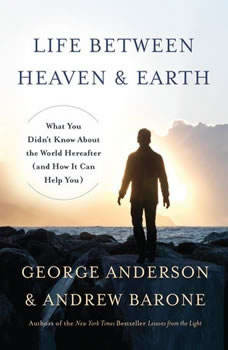 Life Between Heaven and Earth: What You Didn't Know About the World Hereafter (and How It Can Help You)

The New York Times bestselling authors of Lessons from the Light offer a new and provocative understanding of heaven and how messages from the afterlife can assist you in the here and now.

We live in a world of near-universal acceptance that once our lives on the earth come to an end we continue to a greater world. Whether that destination is called "Heaven," "Nirvana," or simply "The Other Side," tradition teaches us that there is, in most cases, a fairy-tale ending to life, a place where joy and harmony reigns supreme.  Yet, as this book attests there is still more to heaven and earth than is dreamt of in our philosophies.

George Anderson is considered by many to be the greatest medium living today. After more than 50 years of hearing from souls who have transitioned to the world hereafter, he is constantly reminded by those who have passed that our preconceived notions of this life— and the next—aren’t always accurate. The nine stories in this book illuminate times when unusual circumstances such as sudden death, unresolved emotions, abusive relationships, and painful family dynamics, make it necessary for the dead and the living to find new doors to healing.

In session with Anderson, survivors and those who have passed meet again in encounters that are profound, bittersweet, highly-emotional and sometimes, downright, funny. What we learn is that there are little-known spiritual treasures—and lessons to be learned—about heaven and earth that can restore, revitalize, and make new what was once broken.

Life Between Heaven and Earth is an inspiring, thought-provoking, path-changing work, one that affirms that no matter how complicated a circumstance is, resolution, peace and acceptance can be found in deep and remarkable ways.