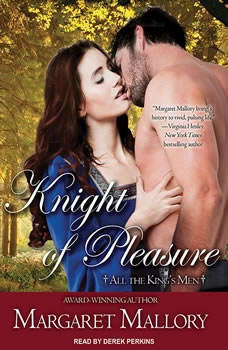 Lady Isobel Hume is an expert swordswoman who knows how to choose her battles. When the king asks her to wed a French nobleman to form a political alliance, she agrees. But that's before the devilishly charming Sir Stephen Carleton captures her heart—and tempts her to betray her betrothed, her king, and her country. Sir Stephen Carleton enjoys his many female admirers—until he dedicates himself to winning the lovely Isobel. So when a threat against the king leads Isobel into mortal danger, Stephen has a chance to prove that he is more than a knight of pleasure . . . and that love can conquer all.

She harbors a secret yearning. As a lover of animals and nature, Beatrix Hathaway has always been more comfortable outdoors than in the ballroom. Even though she participated in the London season in the past, the classic beauty and free-spirited Be...

The Madness of Lord Ian Mackenzie
by Jennifer Ashley

It was whispered all through London society that he was a murderer, that he'd spent his youth in an asylum and was not to be trusted—especially with a lady. Any woman caught in his presence was immediately ruined. Yet Beth found herself inexor...

Knight of Passion
by Margaret Mallory

Renowned beauty Lady Linnet is torn between two desires: revenge on those who destroyed her family or marriage to her childhood sweetheart Sir James Rayburn. One fateful night, she makes a misguided choice: she sacrifices Jamie's love for a chance a...

New York Times best-selling author Teresa Medeiros is a two-time recipient of the Waldenbooks Award for best-selling fiction. In Some Like It Wild, Medeiros weaves the intoxicating tale of beguiling Pamela Darby, who is scheming to collect a health...

Ravishing in Red
by Madeline Hunter

The Truth About Lord Stoneville
by Sabrina Jeffries

In the two decades since a tragic “accident” took the lives of his parents, Oliver Sharpe, the Marquess of Stoneville, has survived the scandal surrounding that fateful night by living as an unrepentant rakehell. And with his grandmother...

All The King's Men Bundle

Knight of Pleasure
All The King's Men #2

Knight of Desire
All The King's Men #1

Knight of Passion
All The King's Men #3