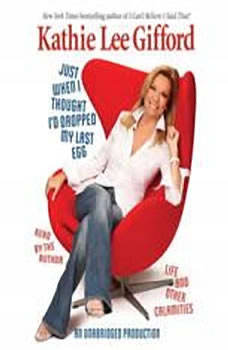 Just When I Thought I'd Dropped My Last Egg: Life and Other Calamities

As one of America’s most recognized faces, Kathie Lee Gifford has been a part of our morning routine for more years than she cares to count. And that’s why it may come as a surprise to hear that there are still sides of this fiftysomething (!) devoted mother and dedicated television personality yet to be revealed.

Just When I Thought I’d Dropped My Last Egg is Kathie Lee’s triumphant, laugh-out-loud celebration of forging ahead with gusto, even long after we’re old enough to know better. Over the years, Kathie Lee has learned a lot about life and about herself. Age, for instance, isn’t a number, it’s a state of mind, and being fertile isn’t just about having babies. Perhaps most important: Our quality of life is sustained by our passions–how we express, define, and even reinvent ourselves at any age, through our careers, interests, friends, and beliefs. It’s never too late to set new goals for yourself and strive to meet them, to dust off your childhood dreams and pursue them again, to wake up every morning hoping to learn something new.

In this riotous collection of musings, observations, and life lessons, Kathie Lee shares her thoughts about marriage, parenthood, friendship, faith, pet peeves, senior moments, and how to extricate oneself from potentially hairy situations with self-deprecating wit. Writing with the candor of a friend who knows where the bodies are buried, Kathie Lee reveals the truth every woman of a certain age knows but won’t admit: that we love our kids every second of every day but are counting the minutes till they’re ready to go off to college, that even though gravity is a constant force, not all parts of our bodies droop at the same rate, and that life and show business share one simple rule: “Don’t sit by the phone and wait for a man or a job.”

Full of warmth, humor, down-to-earth wisdom, and more than a little bit of dish, Just When I Thought I’d Dropped My Last Egg is a delectable read for grown-ups of all ages.