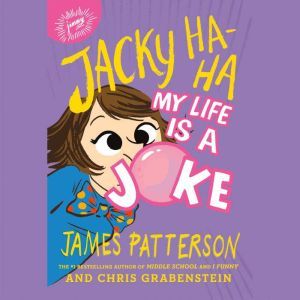 Jacky Ha-Ha: My Life Is a Joke

James Patterson's newest hilarious heroine returns in Jacky Ha-Ha: My Life Is a Joke, the sequel to the smash hit Jacky Ha-Ha---a #1 New York Times bestseller! Jacky Hart has found a hidden talent in the performing arts, and she's a triple threat onstage! She wants nothing more than to act and sing all summer--but her parents have other plans for her. Jacky reluctantly signs up for a summer job in her resort town of Seaside Heights, New Jersey, where tourists come to enjoy the beach and fun carnival atmosphere. Now she has serious responsibilities like her job and babysitting her younger sisters, but Jacky longs to perform in the summer stock performance of A Midsummer Night's Dream. Can she handle all of her important commitments and still have fun with her friends--or will she learn that juggling isn't one of her many talents?James Patterson's middle grade jokester Jacky returns in this wild romp through summer in the Jersey Shore, featuring lively illustrations by French artist duo KerascoA«t.