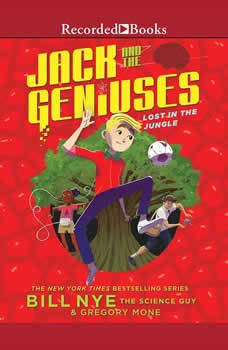 Jack and the Geniuses: Lost in the Jungle

Series: Jack and the Geniuses #3

The next installment of Bill Nye's New York Times bestselling Jack and the Geniuses series. Famed inventor Henry "Hank" Witherspoon has gone missing, and it's up to Jack and his brilliant siblings, Ava and Matt, to find him. At Hank's ransacked lab, the siblings discover clues to the project he's been working on-a new way to generate and store electricity, inspired by the electric eels of the Amazon. The kids travel deep into the Amazon jungle, following a series of clues Hank has left. Relying on genius, cunning, and new technology, the kids overcome strange creatures, a raging river, and some very clever foes to find their friend and protect his big idea.