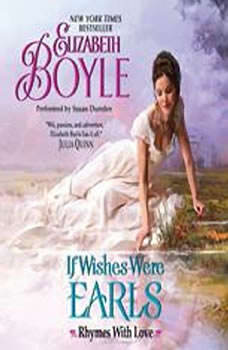 If Wishes Were Earls: Rhymes With Love

When you wish upon an earl . . .Harriet Hathaway has only ever wanted one man: the Earl of Roxley. After a passionate interlude at a house party, Harriet is convinced Roxley will do the right thing and propose. But when she returns to London, she finds the roguish earl on the verge of proposing to another.Yet Harriet refuses to believe that her hopes of a happily-ever-after are completely lost—for she can see the desire still flickering in the earl’s eyes when he looks at her from across the dance floor. And when they are alone . . . there is one wish neither can deny.. . . the most extraordinary things can happenThe Earl of Roxley is in a dangerous fix—and to keep Harriet safe, he must hold her at arm’s length. He won’t entangle her in the murderous mystery that is threatening to destroy his family and his future. But keeping Harriet Hathaway out of his troubles proves as impossible as it is to keep the determined beauty from stealing his heart.

Nine Rules to Break When Romancing a Rake
by Sarah MacLean

A lady does not smoke cheroot. She does not ride astride. She does not fence or attend duels. She does not fire a pistol, and she never gambles at a gentlemen's club.Lady Calpurnia Hartwell has always followed the rules, rules that have left he...