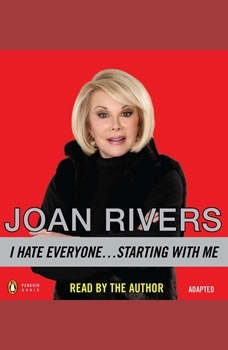 I Hate Everyone...Starting with Me

“How do I love thee? Let me count the ways.”
—Elizabeth Barrett Browning, 1850

“How do I hate thee? How much time do you have?”

—Joan Rivers, today, about two-ish
Joan Rivers is a groundbreaking, award-winning, internationally renowned entertainment goddess. She’s also opinionated—especially when it comes to people she hates. Like people who think giving birth is a unique achievement. Or well-adjusted, a.k.a. boring, ex-child stars who don’t even have a decent addiction.

With all of her diverse experiences, it stands to reason that Joan has seen, done, said, and heard a lot of hateful things. Thank god, she took notes.

Here—uncensored and totally uninhibited—she give the best of her worst to First Ladies, closet cases, hypocrites, Hollywood, feminists, and overrated historical figures. And even when letting herself have it, Joan doesn’t hold back in this honest, unabashedly hilarious love letter to the hater in all of us.

You Blew It!
by Josh Gondelman

A hilarious examination of faux pas for readers of Allie Brosh's Hyperbole and a Half and Jenny Lawson's Let's Pretend This Never Happened Humankind is doomed. Especially you. It's already too late. From overstaying your welcome at a party, to leavi...

The Gold Standard
by Ari Gold

Ari Gold, after years of dominating the Hollywood agency scene, finally offers invaluable tips and advice on how to be as successful in work and in life as Gold himself. Ari Gold is known for his ruthless approach to deal-making and client relation...

Conversations between a southern mom and her son.

A Brief History of Vice
by Robert Evans

A celebration of the brave, drunken pioneers who built our civilization one seemingly bad decision at a time, A Brief History of Vice explores a side of the past that mainstream history books prefer to hide. History has never been mor...

So You're Going Bald!
by Julius Sharpe

Educational, uplifting, and thoroughly hilarious, this rollicking “bald memoir” is a one-stop guide to appreciating life as you lose your hair, and offers dating, grooming, marriage, sex, and even toupee advice for bald men and the peop...

The Rants
by Dennis Miller

There's good news for those that rage at the  evening news, shake their heads at Washington's  business-as-usual, or watch as politicians carom from  social crisis to political crisis to economic  crisis: Denn...

In Fifty Years We'll All Be Chicks
by Adam Carolla

A couple years back, I was at the Phoenix airport bar.  It was empty except for one heavy-set, gray bearded, grizzled guy who looked like he just rode his donkey into town after a long day of panning for silver in them thar hills.  He orde...

And Then We Danced
by Henry Alford