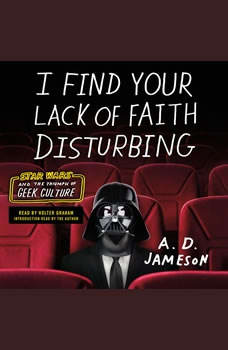 I Find Your Lack of Faith Disturbing: Star Wars and the Triumph of Geek Culture

A. D. Jameson celebrates the triumph of geekdom in I Find Your Lack of Faith Disturbing, an insightful and irreverent journey through the science fiction, fantasy, and superhero pop-culture cinematic icons whose legions of fans have put them at the top of the box office over and over. Star Wars, Marvel superheroes, The Lord of the Rings—properties that were once supposedly the domain of socially maladroit youth have become mainstream entertainment, enjoyed by enormous audiences and by more than a few film critics too. But there are those commentators who have decried the way in which serious adult cinema has seemingly vanished, with Hollywood dominated by mindless kiddie fare such as tent-pole-event movies, franchises, and endless remakes and reboots.As a lifelong geek, A. D. Jameson blasts through the cliches that have always surrounded pop-culture phenomena: that fans are mindless followers who will embrace all things Spider-Man, regardless of quality; or that the popularity and financial success of nerd cinema represents the death of ambitious film-making. Instead, he makes a case for why genre films are worthy of serious critical attention—and shares his thoughts on where their true flaws lie.Shining a new light on beloved classics, and exploding misconceptions as to their historical and intellectual value, I Find Your Lack of Faith Disturbing explores how the geek inherited the earth.