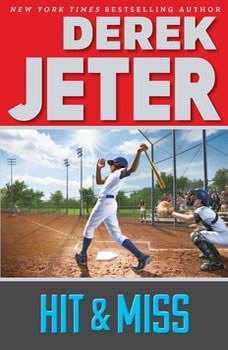 The second book in the New York Times bestselling Jeter Publishing imprint, Hit & Miss is a middle grade baseball novel inspired by the youth of legendary sports icon and role model Derek Jeter.“Just try to make solid contact, stay level and in control. Positive thoughts only, right?” That’s the advice Derek’s father gives him about batting—and a lot more. It seems that Little League season is here. Throughout the long Michigan winter, Derek thought that Opening Day might never come. Now at last he can pursue his dream of one day playing shortstop for the New York Yankees. As luck would have it, he’s on the Red Sox this year, and they seem to have more talent than the Tigers, the team he was on when last season ended in disappointment. His best friend, Vijay, is with him again, and Derek gets the same number—13!—that his father wore in college. Now if the new kid with the chauffeur turns out to be a player, well, the Red Sox might just win it all. But as Derek finds out, both baseball and life are hard. Before the season is over, he’ll break out of a slump, bring his teammates closer together, learn a new sport, solve the mystery of why his sister Sharlee seems so quiet and suffer the consequences for violating “The Contract” he had signed with his parents. Before he can move closer to his dream, there are many lessons to be learned.

Aristotle and Dante Discover the Secr...
by Benjamin Alire Saenz