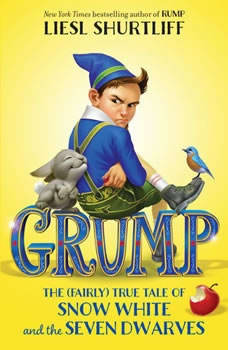 Grump: The (Fairly) True Tale of Snow White and the Seven Dwarves

From the New York Times bestselling author of Rump, comes the true story behind another unlikely hero: a grumpy dwarf who gets tangled up in Snow White's feud with the wicked queen.

Ever since he was a dwarfling, Borlen (nicknamed "Grump") has dreamed of visiting The Surface, so when opportunity knocks, he leaves his cavern home behind.
At first, life aboveground is a dream come true. Queen Elfrieda Veronika Ingrid Lenore (E.V.I.L.) is the best friend Grump always wanted, feeding him all the rubies he can eat and allowing him to rule at her side in exchange for magic and information. But as time goes on, Grump starts to suspect that Queen E.V.I.L. may not be as nice as she seems. . . .
When the queen commands him to carry out a horrible task against her stepdaughter Snow White, Grump is in over his head. He's bound by magic to help the queen, but also to protect Snow White. As if that wasn't stressful enough, the queen keeps bugging him for updates through her magic mirror! He'll have to dig deep to find a way out of this pickle, and that's enough to make any dwarf Grumpy indeed.

"Liesl Shurtliff writes the perfect middle-grade page-turners that fourth graders can gobble down on the plane, train, and automobile trips ahead this summer. . . . [she] excels at turning familiar worlds on their heads. --The New York Times Book Review

"A hilarious reimagining of its origin story with a wonderfully detailed world and interesting twists on classic characters. Sure to be a hit with fantasy fans looking for comedy." --Booklist

"The story moves at a fast pace and deftly balances lighthearted humor with emotional weight. . . .a sure hit for Shurtliff's fans." --School Library Journal

Rump: The True Story of Rumpelstiltskin
by Liesl Shurtliff