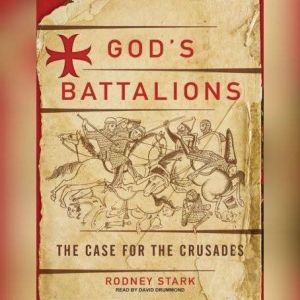 God's Battalions: The Case for the Crusades

In God's Battalions, award-winning author Rodney Stark takes on the long-held view that the Crusades were the first round of European colonialism, conducted for land, loot, and converts by barbarian Christians who victimized the cultivated Muslims. To the contrary, Stark argues that the Crusades were the first military response to unwarranted Muslim terrorist aggression. Stark reviews the history of the seven major Crusades from 1095 to 1291, demonstrating that the Crusades were precipitated by Islamic provocations, centuries of bloody attempts to colonize the West, and sudden attacks on Christian pilgrims and holy places. Although the Crusades were initiated by a plea from the pope, Stark argues that this had nothing to do with any elaborate design of the Christian world to convert all Muslims to Christianity by force of arms. Given current tensions in the Middle East and terrorist attacks around the world, Stark's views are a thought-provoking contribution to our understanding and are sure to spark debate.

God's Battalions: The Case for the Crusades, by Rodney Stark. Mr. Stark is a brave man to lay out an argument explaining the rationale behind the Crusades, and he's very observant. Indeed, nearly everything I've ever read on the Crusades left me with the impression that the European Crusaders were blood-thirsty, expansionist, war-mongers intent on colonizing the Middle East because, well, that's just what European do. Steven Runciman's 3-volume A History of the Crusades, for example, reads like a polemical condemnation of all things European set against the lights of a superior Islamic culture. Rodney Stark corrects that, and it is long overdue. He begins by pointing out that much of North Africa, the Middle East and southern Europe were Christian and Jewish for hundreds and hundreds of years before Muhammad was informed by Allah, via the archangel Gabriel, that it was his holy duty to tax, enslave and/or murder non-Muslims. God's Battalions takes to task historians like Runciman, James Carroll, and Karen Armstrong by providing a context to the Crusades. A book review is not the place to retrace the course of the Crusades, but a partial listing of Muslim conquests from Stark's narrative should give interested readers some idea as to why Europeans at last reacted to the unrelenting Islamic onslaught. Muslims attacked: Syria - 633 Damascus falls - 635 Byzantine forces abandon Syria following the Battle of Yarmuk - 636 Persia is invaded by peace-loving Muslims - 636 Ctesiphon a city in modern-day Iraq is destroyed - 636 Armenia invaded - 636 Pakistan invaded - 636 Palestine invaded - 636 Jerusalem surrendered - 638 Egypt attacked by peace-loving Muslims - 639-640 Nikiou, Egypt taken, its inhabitants slaughtered - 640 Alexandria, Egypt briefly taken - 641 Alexandria, Egypt retaken, its inhabitants slaughtered - 645 Cypress invaded - 649 falls 653 Sicily invaded - 649 attacked again - 652 attacked again - 667 attacked again - 720 attacked again - 827 Palermo falls 831, Syracuse falls 878, Taormina falls 902 Rhodes invaded - 649 falls 672 Carthage razed and all its inhabitants slaughtered by peace-loving Muslims - 705 Spain invaded - 711 Sardinia falls - 809 Majorca falls - 818 Crete falls - 824 Malta falls to peace-loving Muslims - 835. And on and on and on. Students of the Crusades should add Mr. Stark's work to their libraries.