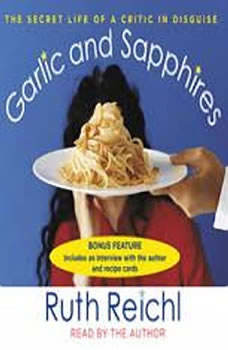 Includes an interview with the author and recipe cards!

GARLIC AND SAPPHIRES is Ruth Reichl's riotous account of the many disguises she employs to dine anonymously. There is her stint as Molly Hollis, a frumpy blond with manicured nails and an off-beige Armani suit that Ruth takes on when reviewing Le Cirque. The result: her famous double review of the restaurant: first she ate there as Molly; and then as she was coddled and pampered on her visit there as Ruth, New York Times food critic.

What is even more remarkable about Reichl's spy games is that as she takes on these various disguises, she finds herself changed not just superficially, but in character as well. She gives a remarkable account of how one's outer appearance can very much influence one's inner character, expectations, and appetites.

As she writes, "Every restaurant is a theater . . . even the modest restaurants offer the opportunity to become someone else, at least for a little while." GARLIC AND SAPPHIRES is a reflection on personal identity and role playing in the decadent, epicurean theaters of the restaurant world.

The national bestseller from the acclaimed author of The Wives of Henry VIII.  France’s beleaguered queen, Marie Antoinette, wrongly accused of uttering the infamous “Let them eat cake,” was the subject of ridicule and cu...

The Journey of Crazy Horse is the true story of how one man's fight for his people's survival roused his true genius as a strategist, commander, and trusted leader. And it is an unforgettable portrayal of a revered human being and a profound celebra...

“I found a pattern in my behavior that had been repeating itself for years, decades even. Bad choices were my specialty, and if something honest and decent came along, I would shun it or run the other way.”With striking intimacy and cand...

In this very special collection of favorite stories about dogs great and small, James Herriot tells us about his own dogs and all the wonderful people and animals we have come to love so much. Fifty memorable tales move us to both laughter and tears...