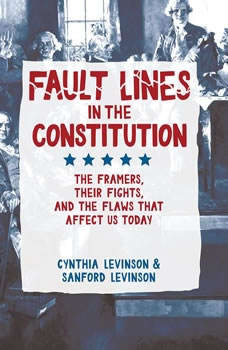 Fault Lines in the Constitution: The Framers, Their Fights, and the Flaws that Affect Us Today

Many of the political issues we struggle with today have their roots in the US Constitution.

Husband-and-wife team Cynthia and Sanford Levinson take readers back to the creation of this historic document and discuss how contemporary problems were first introduced--then they offer possible solutions. Think Electoral College, gerrymandering, even the Senate. Many of us take these features in our system for granted. But they came about through haggling in an overheated room in 1787, and we're still experiencing the ramifications.

Each chapter in this timely and thoughtful exploration of the Constitution's creation begins with a story--all but one of them true-- that connects directly back to a section of the document that forms the basis of our society and government. From the award-winning team, Cynthia Levinson, children's book author, and Sanford Levinson, constitutional law scholar, Fault Lines in the Constitution will encourage exploration and discussion from young and old readers alike.

This Is Our Constitution
by Khizr Khan

From Gold Star father and beloved Democratic National Convention speaker Khizr Khan comes a book for young people about the Constitution—what it says and why it matters for everyone.   Our Founding Fathers created the U.S. Constitution an...

Los Tres Documentos que Hicieron Amrica [The Three Documents That Made America, in Spanish]
by Unknown

Hillary Rodham Clinton: Do All the Good You Can
by Cynthia Levinson

We've Got a Job: The 1963 Birmingham Children's March
by Cynthia Levinson

By May 1963, African Americans in Birmingham, Alabama, had had enough of segregation and police brutality. But with their lives and jobs at stake, most adults were hesitant to protest the city’s racist culture. Instead, children and teenagers&...