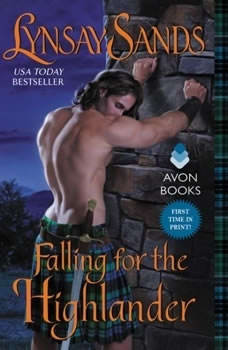 Falling for the Highlander

New York Times bestselling author Lynsay Sands welcomes readers back to the Scottish Highlands, where a gallant warrior vows to protect a beautiful runaway . . .Lady Murine Carmichael has known her share of bad luck. But when her debt-ridden half brother tries to sell her off in exchange for a few Scottish horses, it’s the final straw. If keeping her freedom means escaping through harsh countryside alone, so be it. She has barely begun her journey when she lands an unlikely escort—the brawny Highlander who just refused to buy her virtue.Dougall Buchanan was disgusted by Lord Danvries’ shameful offer, but Murine tempts him beyond measure. Even bedraggled and dusty, the lass glows with beauty and bravery. Dougall wants to do more than just help her flee. He wants to protect her—with his life and his heart—if she’ll only let him. For Murine may be pursued by a powerful foe, but nothing compares to the fiery courage of a Highlander in love.

The Highlander Takes a Bride
by Lynsay Sands

Falling for the Highlander
Highland Brides #4