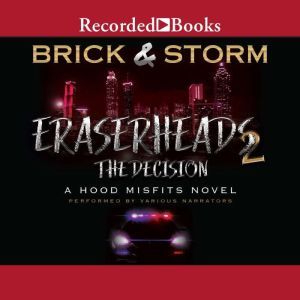 In Brick & Storm's Hood Misfits series, the motto is ENGA: Every nigga got an agenda, and in this tale, things are no different. Everyone has a secret. There were two things of which Auto, leader of the elusive Eraserheads, was certain: Code, his partner and best friend, had betrayed him, and Caltrone Orlando, the biggest crime lord in North America, had marked him and his team for death. Crossing Caltrone Orlando had come with a steep price. Auto had suffered fatal losses to his team and business. Smiley hadn't signed up for any of the madness that came along with being an Eraserhead, yet she found herself drawn to their leader in ways she hadn't expected. The connection to the very man who has Auto in his crosshairs could ultimately lead to her downfall as well. Boots had only one agenda when he came to Atlanta: get inside of Caltrone's operation so he could find a way to bring the criminal mastermind down from the inside out. Of course, even the best laid plans can go awry, and when they do, Auto, Boots, and Smiley find themselves in the fight of their lives