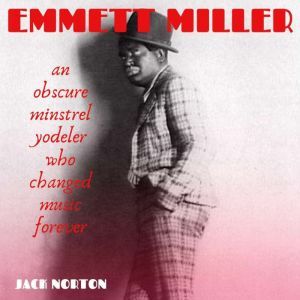 One of the strangest, most obscure, and intriguing stories from the last century of American music is that of Emmett Miller. He helped define the popular music of the last 75 years, and for the most part, today he is all but forgotten. Emmett Miller left many legacies which influenced the American musical landscape for generations. Certainly his singing style - the odd nasal pitch tone, along with the breaking of lines and bars in a song to a high yodel-like yelp - has been imitated by scores of singers since Miller first waxed his signature style to record in 1924. Jimmie Rodgers, Gene Autry, Lefty Fritzell, the Rhythm Wreckers, Bob Wills, Woody Guthrie, Howlin' Wolf, Leon Redbone and Bob Dylan all have been influenced by Miller's one-of-a-kind vocal abilities. Of equal importance was Miller's visionary fusion of blues and jazz, country and swing, black and white, comedy and crooning.

Whether he knew what he was doing at the time or not, Miller almost single-handedly tore down the strict boundaries of musical ideas of the era. Here was a young, white, Christian man from the south, singing hot-jazz and black music in the north. Performing as a blackface with some of the most influential jazz musicians of all time (Jimmy and Tommy Dorsey, Gene Krupa, Eddie Lang, Jack Teagarden, and more). He created an entirely new style of country: pop. Country which swung. Country that was equally parts white and black, urban and rural. Country that was slurred through whiskey, girls, the road, and came out as the earliest forms of beatnik jive. Listening to Miller's music today, one can hear the startling sound of a man perfectly in sync with the present: he's influenced by the past, while he anticipated what was coming just around the bend. For fans of music history, musicology, Americana, country music, hillbilly, minstrelsy and vaudeville.