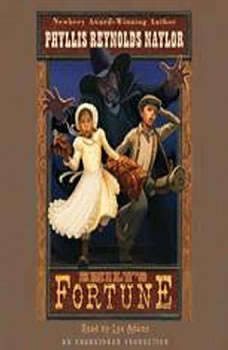 From Newbery Award winner Phyllis Reynolds Naylor comes a witty tale of the Wild West filled with comical cliffhangers and featuring a cast of plucky orphans and dastardly villains.

Emily Wiggins is poor and timid, without a drop of self-confidence. When she is unexpectedly orphaned, she is left all alone except for her turtle, Rufus.

What in blinkin' bloomers should Emily do?

Emily's neighbors, Mrs. Ready, Mrs. Aim, and Mrs. Fire, have the answer: Emily must travel by stagecoach to the home of her honorable aunt Hilda.

What a rootin' tootin' grand idea!

But Miss Catchum of the Catchum Child-Catching Services will get a big bonus for delivering Emily to her next of kin, the vicious Uncle Victor.

How the ding dong dickens will Emily escape Miss Catchum?

It will take all the gumption and cunning of fellow orphan and traveler Jackson to help Emily find her confidence, her conniving spirit, and the true reason Uncle Victor wants to claim her.

But how in flippin' flapjacks will Emily outsmart Uncle Victor?

Island of the Blue Dolphins
by Scott O'Dell

In the Pacific, there is an island that looks like a big fish sunning itself in the sea. Around it blue dolphins swim, otters play, and sea birds abound. Karana is the Indian girl who lived alone for years on the Island of the Blue Dolphins. Hers is...

What does it mean when the man who wrote the Declaration of Independence is your father and also your slave master? Beverly, Harriet, Madison, and Eston are Thomas Jefferson’s children, but their mother is a slave, so they must keep their...

Rush Revere and the American Revolution
by Rush Limbaugh

THE AMERICAN REVOLUTION HAS BEGUN—AND RUSH REVERE, LIBERTY THE HORSE, AND THE TIME-TRAVELING CREW ARE READY TO RIDE INTO THE ACTION!Join us on this incredible time-travel adventure!Liberty, my wisecracking horse, our old friends Cam, Tommy, Fr...

The sixth book in Laura Ingalls Wilder’s treasured Little House series, and the recipient of a Newbery Honor.The town of De Smet in the Dakota Territory is hit with terrible blizzards in the hard winter of 1880-81, and the Ingalls family must...

Our Only May Amelia
by Jennifer L. Holm

She may be a miracle, but she’s no Proper Young Lady!It isn’t easy being a pioneer in the state of Washington in 1899, but it’s particularly hard when you are the only girl ever born in the new settlement. With seven older brothers...

The Land
by Mildred D. Taylor

This searing and inspiring prequel to ROLL OF THUNDER, HEAR MY CRY is the story of Cassie Logan's grandfather. Paul-Edward is the son of a white father and a half-black, half-Indian mother. His father raises him almost as if he were white, but when ...

Rush Revere and the Star-Spangled Banner
by Rush Limbaugh

America’s #1 radio talk-show host and multi-million-copy #1 New York Times bestselling author presents an audiobook for young readers with a history teacher who travels back in time to have adventures with exceptional Americans.IT’S THE ...

The Slave Dancer
by Paula Fox

Jessie Bollier often played his fife to earn a few pennies down by the New Orleans docks. One afternoon a sailor asked him to pipe a tune, and that evening Jessie was kidnapped and dumped aboard The Moonlight, a slave ship, where a hateful duty awai...

I Survived #11: I Survived the Great Chicago Fire, 1871
by Lauren Tarshis

Could an entire city really burn to the ground? Oscar Starling never wanted to come to Chicago. But then Oscar finds himself not just in the heart of the big city, but in the middle of a terrible fire! No one knows exactly how it began, but one thi...