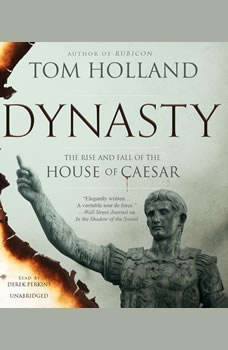 Dynasty: The Rise and Fall of the House of Caesar

Author and historian Tom Holland returns to his roots in Roman history and the audience he cultivated with Rubiconhis masterful, witty, brilliantly researched popular history of the fall of the Roman republicwith Dynasty, a luridly fascinating history of the reign of the first five Roman emperors. Dynasty continues Rubicons story, opening where that book ended: with the murder of Julius Caesar. This is the period of the first and perhaps greatest Roman emperors. Its a colorful story of rule and ruination, from the rise of Augustus to the death of Nero. Hollands expansive history also has distinct shades of I, Claudius, with five wonderfully vivid (and in three cases, thoroughly depraved) emperorsAugustus, Tiberius, Caligula, Claudius, and Nerofeatured, along with numerous fascinating secondary characters. Intrigue, murder, naked ambition and treachery, greed, gluttony, lust, incest, pageantry, decadencethe tale of these five Caesars continues to cast a mesmerizing spell across the millennia.

The Leadership Genius of Julius Caesar
by Phillip Barlag

The Leadership Genius of Julius CaesarModern Lessons from the Man Who Built an Empire“Brilliantly crafted to draw leadership lessons from history, this is one of the finest leadership books I have read.”—Doris Kearns Goodwin, bests...

In AD 200, the Roman Empire seemed unassailable, its vast territory accounting for most of the known world. By the end of the fifth century, Roman rule had vanished in western Europe and much of northern Africa, and only a shrunken Eastern Empire re...

NEW YORK TIMES BESTSELLER The creator of the award-winning podcast series The History of Rome and Revolutions brings to life the bloody battles, political machinations, and human drama that set the stage for the fall of the Roman Republic.The Roma...

The Rise of Rome
by Anthony Everitt

Emerging as a market town from a cluster of hill villages in the eighth and seventh centuries B.C., Rome grew to become the ancient world's preeminent power. Everitt fashions the story of Rome's rise to glory into an erudite book filled with last...

Lost to the West
by Lars Brownworth

Filled with unforgettable stories of emperors, generals, and religious patriarchs, as well as fascinating glimpses into the life of the ordinary citizen, Lost to the West reveals how much we owe to the Byzantine Empire that was the equal of any i...

The Story of Civilization Volume 2: The Medieval World
by Phillip Campbell

Children should not just read about history, they should live it. In The Story of Civilization author Phillip Campbell uses his historical expertise and storytelling ability together in tandem, to present history's greatest stories in a fresh and th...

This is the story of the greatest empire the world has ever known. Simon Baker charts the rise and fall of the world's first superpower, focusing on six momentous turning points that shaped Roman history. Welcome to Rome as you've never seen it befo...

In AD 60/61, Rome almost lost the province of Britain to a woman. Boudica, wife of the client king Prasutagus, fomented a rebellion that proved catastrophic for Camulodunum (Colchester), Londinium (London), and Verulamium (St. Albans), destroyed par...