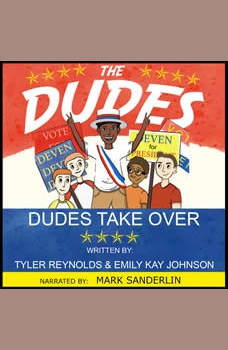 It’s 5th Grade, and the Dudes are ready to rule the school.

The Goal: To take possession of the most powerful dart gun ever invented! You won’t want to miss Deven’s hilarious election speech, Jayden’s Dude-themed birthday bash, or the battle with baby-stealing bandits!

Guard your garden gnome because Dudes are taking over!

Sherwood will never be the same as these five friends take on downhill skiing, a talent show, a robot bidding war, and a spy mission to the principal’s office.

The Dudes Adventure Chronicles is a series for intermediate readers 8-14 who can’t get enough madcap adventure and hilarious hijinks. Wacky enough to keep kids reading. The Dudes are a diverse group of preteen boys whose clever mischief turn their suburban neighborhood upside down. Classic humor without movie tie-ins or fart jokes! Appeals to middle grade readers who like funny, realistic fiction without a tacked-on message or ripped-from-the-headlines problem.

Warning to Parents: Anecdotal evidence suggests that readers of the Dudes may imagine some resemblance between the Dudes’ parents and their own.

Gooney the Fabulous
by Lois Lowry