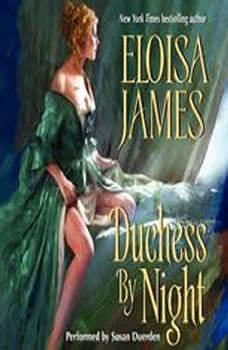 A Mischievous Charade . . . Harriet, Duchess of Berrow, is tired of her title and the responsibilities that come along with it. Enough with proper tea parties and elegant balls; what Harriet really wants is to attend an outrageous soiree where she can unleash her wildest whims and desires. But to attend such an event—especially if the event in question is Lord Justinian Strange's rollicking fete, filled with noble rogues and rotters, risqué ladies and illicit lovers—would be certain scandal. That's why she must disguise herself . . .Looking forward to a night of uninhibited pleasure, Lord Strange is shocked to discover that beneath the clothes of a no-good rake is the most beautiful woman in the room. Why is a woman like her risking her reputation at his notorious affair? And can he possibly entice her to stay . . . forever?

From Back: Harriet, Duchess of Berrow, is tired of her title and the responsibilities that come along with it. Enough with proper tea parties and elegant balls what Harriet really wants is to attend an outrageous soiree where she can unleash her wildest whims and desires. But to attend such an event - especially if the event in question is, Lord Justinian Strange's rollicking fete, filled with noble rogues and rotters, risque ladies and illicit lovers - would be certain scandal. That's why she must disguise herself.... I really enjoyed book three of this series. The game Harriet and Justinian play shows us how good we women of today have it. We don't have to disguise ourselves to enjoy stimulating conversation.

When the Duke Returns
Desperate Duchesses #4

This Duchess of Mine
Desperate Duchesses #5