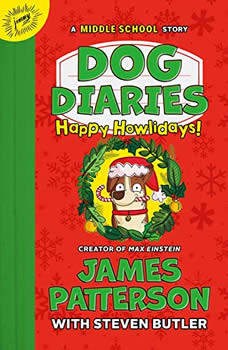 Dog Diaries is the first book written by a dog AND a #1 New York Times bestseller! When mischievous mutt, Junior, causes a Turkey Day disaster, getting out of the doghouse will take a Christmas miracle!Are you ready for a festive adventure? Join me, Junior on the most PAWSOME, most BARKTASTIC journey through the HOWLIDAY SEASON. You'll read all about:FANGSGIVING, CRITTER-MESS and the mysterious SAINT LICK. Why strange humans called CAROL come and howl at the front door.And why SHINY TREES suddenly sprout inside your kennel!This will be the best holiday EVER! As long as the Mom-Lady doesn't find out what I did to the Fangsgiving turkey. You can keep a SECRET, right?This hilarious, illustrated MIDDLE SCHOOL spin-off about a dog and his boy is perfect for younger readers!