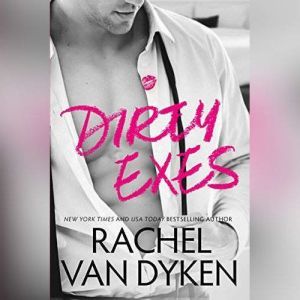 They’re serving up some red-hot revenge. A sizzling series from #1 New York Times bestselling author Rachel van Dyken.Blaire has never quite gotten over Jessie Beckett, the ex–NFL star whose kisses were hot enough to ignite the entire Eastern Seaboard. When he chose work over her, Blaire was left brokenhearted. Why else would she have married a skeezy two-timer, just to divorce him less than a year later?Now Blaire is getting even by becoming one half of Dirty Exes, a PI firm fully committed to humiliating cheating jerks. If only the new jerk she’s been hired to uncover wasn’t Jessie Beckett himself.Exposing Jessie isn’t going to be easy, especially when she still daydreams about his sexy smile. Further complicating matters is Colin, Jessie’s best friend. He’s gorgeous, a little bit cunning, and willing to help Blaire get the inside scoop on Jessie—for a price.Now caught between two men—one totally right and the other totally wrong—Blaire will need to decide just how much she’s willing to risk…and whom she’s willing to risk it for.