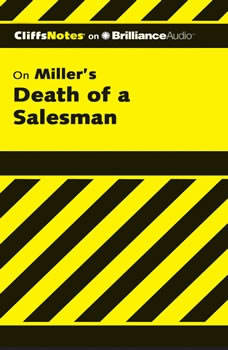 Death of a Salesman

This CliffsNotes study guide on Arthur Miller's Death of a Salesman supplements the original literary work, giving you background information about the author, an introduction to the work, a graphical character map, critical commentaries, expanded glossaries, and a comprehensive index, all for you to use as an educational tool that will allow you to better understand the work. This study guide was written with the assumption that you have read Death of a Salesman. Reading a literary work doesn’t mean that you immediately grasp the major themes and devices used by the author; this study guide will help supplement you reading to be sure you get all you can from Miller's Death of a Salesman. CliffsNotes Review tests your comprehension of the original text and reinforces learning with questions and answers, practice projects, and more. For further information on Arthur Miller and Death of a Salesman, check out the CliffsNotes Resource Center at www.cliffsnotes.com. IN THIS AUDIOBOOK • Learn about the Life and Background of Arthur Miller • Hear an Introduction to Death of a Salesman • Explore themes, character development, and recurring images in the Critical Commentaries • Learn new words from the Glossary at the end of each Chapter • Examine in-depth Character Analyses • Acquire an understanding of Death of a Salseman with Critical Essays • Reinforce what you learn to further your study online at www.cliffsnotes.com

Stories provide portals into other worlds, both real and imagined. The promise of escape draws people from all backgrounds to speculative fiction, but when people of color seek passageways into the fantastic, the doors are often barred. This problem...

What does it take to stay human when humanity has lost the world? The characters of The Walking Dead live in a desolate post-apocalyptic world, filled with relentless violence and death. In reality, how would such never-ending stress and trauma affe...

From the internationally acclaimed, best-selling author of Brother, I'm Dying, a collection of vividly imagined stories about community, family, and love. Rich with hard-won wisdom and humanity, set in locales from Miami and Port-au-Prince to a smal...

“Dead Girls is everything I want in an essay collection: provocative lines of inquiry, macabre humor, blistering intelligence... I love this book. I want to take it into the middle of a crowded room and hold it up and scream until someon...

Everyone knows Sherlock Holmes. Sir Arthur Conan Doyle created a unique literary character who has remained popular for over a century and is appreciated more than ever today. But what made this fictional character, dreamed up by a small-town Englis...

The Ten-Cent Plague
by David Hajdu

In the years between World War II and the emergence of television as a mass medium, American popular culture as we know it was first created in the bold, pulpy pages of comic books. The Ten-Cent Plague explores this cultural emergence and its fierce...

Great poetry can indeed outlast stone and the glory of princes, and the English poetic tradition is perhaps the richest in the world. This audiobook tells the story of that tradition through its towering figures – Spenser and Shakespeare,...

Chet and Bernie—everybody’s favorite human-canine detective team—are asked by a beautiful woman to find evidence that would put her cheating boyfriend in the doghouse in this e-original short story from New York Times bestselling a...