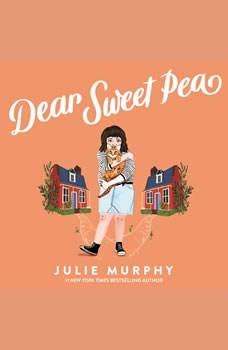 Patricia “Sweet Pea” DiMarco wasn’t sure what to expect when her parents announced they were getting a divorce. She never could have imagined that they would have the “brilliant” idea of living in nearly identical houses on the same street. In the one house between them lives their eccentric neighbor Miss Flora Mae, the famed local advice columnist behind “Miss Flora Mae I?”

Dividing her time between two homes is not easy. And it doesn’t help that at school, Sweet Pea is now sitting right next to her ex–best friend, Kiera, a daily reminder of the friendship that once was. Things might be unbearable if Sweet Pea didn’t have Oscar—her new best friend—and her fifteen-pound cat, Cheese.

Then one day Flora leaves for a trip and asks Sweet Pea to forward her the letters for the column. And Sweet Pea happens to recognize the handwriting on one of the envelopes.

What she decides to do with that letter sets off a chain of events that will forever change the lives of Sweet Pea DiMarco, her family, and many of the readers of “Miss Flora Mae I?”