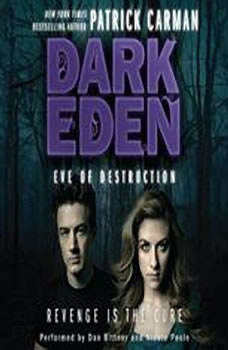 In Dark Eden: Eve of Destruction, the thrilling sequel to New York Times bestselling author Patrick Carman’s Dark Eden, the seven teens who were “cured” by Rainsford reunite to find relief from their ailments...and realize they may have the power to stop Rainsford’s ghoulish reign once and for all.Ensnared in a dangerous and ever-deepening mystery, Will Besting must lead his friends through a perilous underground trap masterminded by two devious souls at war with one another. It’s a game of cat-and-mouse, and not everyone will be alive when it’s over.Dark Eden: Eve of Destruction is a harrowing journey into the depths of fear, love, revenge, and—ultimately—redemption.