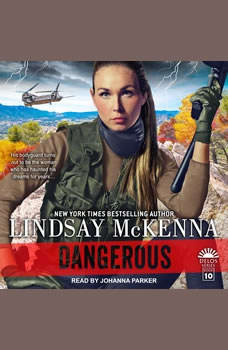 Sloan Kennedy and Dan Malloy met at Bagram and shared a passionate month-long affair. Their relationship was supposed to be no strings, but Sloan fell hard for the strong soldier. Things changed after the two were involved in a rescue mission that ended in the death of Dan's co-pilot. Riddled with guilt over the accident and the loss of his friend, Dan walked away from Sloan and his destroyed military career. Four years later, Dan is a helicopter pilot for Delos, flying team members to their various charities in Sudan. When chatter starts up that terrorists are targeting Delos charities, Dan is assigned a security escort from Artemus for his duration of the assignment. He is shocked when his bodyguard turns out to be the woman who has haunted his dreams for years—Sloan Kennedy. Thrown together again, old feelings bubble to the surface, but danger is lurking nearby. Sloan and Dan will be lucky to walk away from this mission with their lives—and hearts—intact. Contains mature themes.