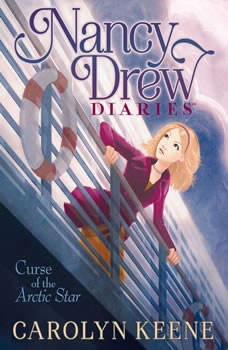 Curse of the Arctic Star

Dear Diary...Bess, George, and I are actually in Alaska! Everywhere you look, there are massive mountains and sparkling deep-blue waters. We&rsquo;re on the maiden voyage of the Arctic Star luxury cruise ship, and my old friend Becca Wright, the assistant cruise director, needs our help. She received threatening e-mails before even setting sail; then, a bloody body turned up in the swimming pool. And when a chandelier came crashing down in the dining room, we thought the Arctic Star may be cursed! There are so many passengers on board, I don&rsquo;t know where to begin. But I better hurry; if I don&rsquo;t act fast, this might be everyone&rsquo;s final &mdash; and fatal &mdash; voyage!