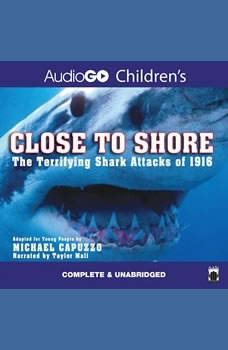 Close to Shore: The Terrifying Shark Attacks of 1916

The summer of 1916 was brutally hot, driving thousands to the Jersey Shore to indulge in the newfangled activity of swimming in the ocean, and a good swimmer could strut his stuff in front of an appreciative audience. But happiness turned to horror as a killer invaded this idyllic scene-with never a warning and showing no mercy to its victims. Soon the beaches were filled with screams as this monster of the sea dragged unsuspecting vacationers down under the waves, chomping off limbs and leaving pools of blood and horrified onlookers in its wake. How many deaths would it take before the truth about this terrifying monster would be known? History and hubris. Drama and daring. Science and sizzle. It's all here in one package, brought to life by the extraordinary voice of Taylor Mali. A New York Times bestseller.

Erik Larson is a regular contributor to national magazines including Time, The Atlantic, and Harpers. Filled with images as powerful as the hurricane it describes, Isaacs Storm immediately swept onto best-seller lists across the country. In 1900, ...

With humor and the biting insight of a native, the Pulitzer Prize-winning author of The Looming Tower explores the history, culture, and politics of Texas, while holding the stereotypes up for rigorous scrutiny.God Save Texas is a journey through th...