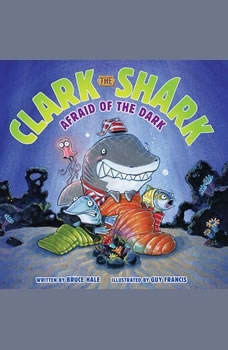 Clark the Shark: Afraid of the Dark

Clark the Shark is ready for his first big sleepover! He’s nervous about sleeping outside without his glow-fish night-light, but he doesn’t want anyone to know he’s just a teeny-tiny bit afraid of the dark. So Clark makes up a rhyme to help him stay cool: “Take heart, be smart, sharks aren’t afraid of the dark.”But when the sun sets and his friends begin telling spooky stories, Clark’s voice sounds quiet and small and not brave at all. In this empowering tale about conquering nighttime fears, Clark the Shark learns how friendship can help light the way through the dark.Featuring bright, colorful artwork from Guy Francis and hilarious read-aloud text from Bruce Hale, this Clark the Shark picture book is the perfect story for kids braving nighttime jitters!