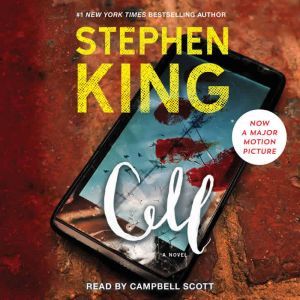 There's a reason cell rhymes with hell. On October 1st, God is in His heaven, the stock market stands at 10,140, most of the planes are on time, and Clayton Riddell, an artist from Maine, is almost bouncing up Boylston Street in Boston. He's just landed a comic book deal that might finally enable him to support his family by making art instead of teaching it. He's already picked up a gift for his long-suffering wife, and he knows just what he'll get for his boy Johnny. Why not a little treat for himself? Clay's feeling good about the future. That changes in a hurry. The cause of the devastation is a phenomenon that will come to be known as The Pulse, and the delivery method is a cell phone. Everyone's cell phone. Clay and the few desperate survivors who join him suddenly find themselves in the pitch-black night of civilization's darkest age, surrounded by chaos, carnage, and a human horde that has been reduced to its basest nature...and then begins to evolve. There are one hundred and ninety-three million cell phones in the United States alone. Who doesn't have one? Stephen King's utterly gripping, gory, and fascinating novel doesn't just ask the question "Can you hear me now?" It answers it with a vengeance.

Cell phones cause people to go...rabid is too light for what happens. Interesting and one of his best of his recent releases. If you like this, search out Blood Crazy by Simon Clark. It'll satisfy you after reading this one.

I've been a fan of Stephen King's books since I read The Shining in the late 70's but I stopped reading them after Misery. It seemed to me as if King had begun believing his own press, and his stories seemed to lose the old edge of his masterpieces like The Shining and The Stand. I started listening to Cell with the same fascination I used to feel with his older books until, near the end, when the story no longer seemed even remotely plausible, I realized that Cell was just another shaggy dog story. If you like episodic tales that don't really go anywhere, Cell may be to your liking. And it did cause me to think about just how pervasive this new cell phone technology has become. But in the end, it was just another long drawn-out story and it'll probably be a long while before I feel drawn to read another of his books.

This is one of my favority Kind novels. I couldn't stop listening to this one, made me late for work alot.