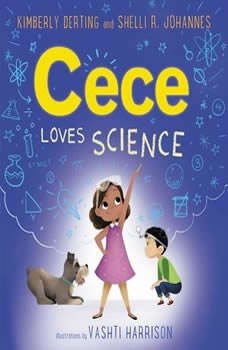 Cece loves science! In this STEM-themed picture book, Cece asks one of life’s most pressing questions: Do dogs eat vegetables? Cece and her best friend, Isaac, head to the lab to find out.This picture book is perfect for fans of Ada Twist, Scientist, and anyone who enjoys asking questions. Cece’s parents say she was born curious. She asks: Why? How? What if? When her teacher, Ms. Curie, assigns a science project, Cece knows just what to ask—do dogs eat vegetables? She teams up with her best friend, Isaac, and her dog, Einstein, to discover the answer. They investigate, research, collect data, and analyze, using Einstein as their case study. Their final conclusion is surprising, and a lot of fun! Cece Loves Science is just right for fans of Rosie Revere, Engineer; What Do You Do with an Idea?; and anyone who loves learning.