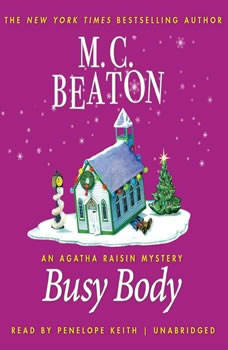 Agatha Raisin has never been one for forced holiday cheer, but her friendly little village of Carsely has always prided itself on its traditional Christmas festivities. But this year the bells will not be ringing out, as Mr. John Sunday, an officer with the Cotswold Health and Safety Board, has chosen Christmas as the time to crack down on safety hazards all around the community. But he goes too far when he rules that there cannot be a Christmas tree atop the church tower this year. Mr. Sunday is soon found facedown in the petunias, very much dead. Agatha is instantly on the case, but with so many people having threatened the life of the victim, its almost impossible to know where to start!

As the Pig Turns
The Agatha Raisin Mysteries