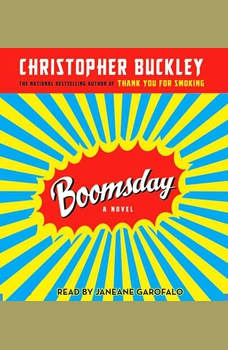 Outraged over the mounting Social Security debt, Cassandra Devine, a charismatic 29-year-old blogger and member of Generation Whatever, incites massive cultural warfare when she politely suggests that Baby Boomers be given government incentives to kill themselves by age 75. Her modest proposal catches fire with millions of citizens, chief among them "an ambitious senator seeking the presidency." With the help of Washington's greatest spin doctor, the blogger and the politician try to ride the issue of euthanasia for Boomers (called "transitioning") all the way to the White House over the objections of the Religious Right, and of course, the Baby Boomers, who are deeply offended by demonstrations on the golf courses of their retirementresorts.

How could the 14 subscribers who've rated this audiobook give it an average of only 3 stars? Every written review on this page gives it 5 stars. Very odd 'system' you have, Booksfree. Garofalo reads this perfectly. She captures Buckley's dry wit with just the right deadpan delivery and manages to make this wonderfully over-the-top plot line just plausible enough to be both hilarious and a little unsettling due to the truth behind the humor. No one from Harvard could have written something this good.