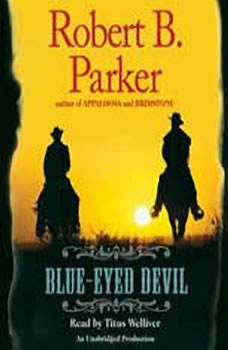 Series: A Cole and Hitch Novel #4

Law enforcement in Appaloosa had once been Virgil Cole and me. Now there was a chief of police and twelve policemen. Our third day back in town, the chief invited us to the office for a talk.

The new chief is Amos Callico, a tall, fat man in a derby hat, wearing a star on his vest and a big pearl-handled Colt inside his coat. An ambitious man with his eye on the governorship—and perhaps the presidency—he wants Cole and Hitch on his side. But they can’t be bought, which upsets him mightily.

When Callico begins shaking down local merchants for protection money, those who don’t want to play along seek the help of Cole and Hitch. When Cole is forced to fire on the trigger-happy son of politically connected landowner General Horatio Laird, Callico sees his dream begin to crumble. The guns for hire are thorns in the side of the power-hungry chief, and he’ll use any excuse to take them out. There will be a showdown—but who’ll be left standing?

I loved Virgil and Everett in Appalosa, their finely tuned partnership and quick banter made them interesting. So I looked forward to the sequel, Brimstone, then Resolution, now Blue-eyed Devil. But the storylines have became more diluted and boringly predictable. Mr. Parker, the gravy is getting mighty thin! These two lawmen have led interesting lives before crossing paths and hearing more of that would only serve to make the characters more real. Everett went to West Point, but we know little of his military career. Why did he spend only one year fighting in the Indian Wars? All we know of Virgil is he lived with an Indian woman once. And I've had more than enough of Allie's antics and worse yet, Virgil's sick infatuation with her. Come on Virgil, shake the meadow muffins out of your ears and pay attention! I hope Mr. Parker will write a sequel but before he does, he needs to spend some time with Virgil and Mr.8 Gauge. I suspect they have a wagonload of things to say.

Robert B. Parker's Ironhorse
A Cole and Hitch Novel #5

Robert B. Parker's Bull River
A Cole and Hitch Novel #6