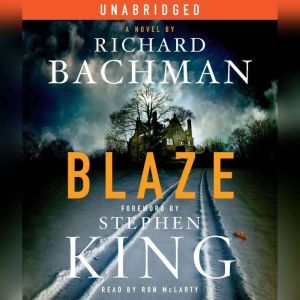 The last of the Richard Bachman novels, recently recovered and published for the first time. Stephen King's "dark half" may have saved the best for last. A fellow named Richard Bachman wrote Blaze in 1973 on an Olivetti typewriter, then turned the machine over to Stephen King, who used it to write Carrie. Bachman died in 1985 ("cancer of the pseudonym"), but in late 2006 King found the original typescript of Blaze among his papers at the University of Maine's Fogler Library ("How did this get here?!"), and decided that with a little revision it ought to be published. Blaze is the story of Clayton Blaisdell, Jr. -- of the crimes committed against him and the crimes he commits, including his last, the kidnapping of a baby heir worth millions. Blaze has been a slow thinker since childhood, when his father threw him down the stairs -- and then threw him down again. After escaping an abusive institution for boys when he was a teenager, Blaze hooks up with George, a seasoned criminal who thinks he has all the answers. But then George is killed, and Blaze, though haunted by his partner, is on his own. He becomes one of the most sympathetic criminals in all of literature. This is a crime story of surprising strength and sadness, with a suspenseful current sustained by the classic workings of fate and character -- as taut and riveting as Stephen King's The Girl Who Loved Tom Gordon.

One of King's best...Blaze is the most sympathetic villain of any novel I've read. The story just flows and you really can't wait to find out what happens next.