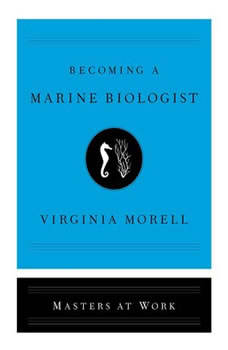 Choosing a profession begins with imagining yourself in a career. Now New York Times bestselling author Virginia Morell dives into the adventures of a marine biologist team, allowing a much needed, in-depth look into the field.What’s it like to be a marine biologist? And how does one build a career in this field that has great environmental impact? For the last two decades, Robin Baird has been the leading expert on twenty-five species of the whales and dolphins of Hawaii. He and his team have discovered that many of the species have resident populations (they are not simply passing through the islands) and these residents are affected by human activities. For most young people, Baird’s trajectory may seem an impossible dream. Indeed, many of the researchers Virginia Morell met and interviewed didn’t set out to become marine biologists or to study marine mammals. Most of them had a lifelong passion for the natural world, and by volunteering found themselves drawn to working with marine life or some other aspect of the sea. Morell tells their stories, and many others, here. Becoming a Marine Biologist explores how successful marine biologists curated their careers, and what they suggest to young people today who feel called to protect our oceans by studying the sea and its inhabitants.

How to Fail at Almost Everything and ...
by Scott Adams

The 4-Hour Workweek
by Timothy Ferriss

The First 90 Days
by Michael Watkins

Your First Year in Network Marketing
by Mark Yarnell

The Confidence Code
by Katty Kay

Becoming a Veterinarian
Masters at Work