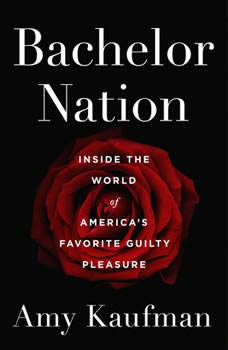 Bachelor Nation: Inside the World of America's Favorite Guilty Pleasure

For sixteen years and thirty-six seasons, the Bachelor franchise has been a mainstay in American TV viewers’ lives. Since it premiered in 2002, the show’s popularity and relevance have only grown—more than eight million viewers tuned in to see the conclusion of the most recent season of The Bachelor.

Los Angeles Times journalist Amy Kaufman is a proud member of Bachelor Nation and has a long history with the franchise—ABC even banned her from attending show events after her coverage of the program got a little too real for its liking. She has interviewed dozens of producers, contestants, and celebrity fans to give readers never-before-told details of the show’s inner workings: what it’s like to be trapped in the mansion “bubble”; dark, juicy tales of producer manipulation; and revelations about the alcohol-fueled debauchery that occurs long before the Fantasy Suite.

Kaufman also explores what our fascination means, culturally: what the show says about the way we view so-called ideal suitors; our subconscious yearning for fairy-tale romance; and how this enduring television show has shaped society’s feelings about love, marriage, and feminism by appealing to a marriage plot that’s as old as the best of Jane Austen.

From the brilliantly witty and exuberant New York Times bestselling author Ken Jennings, a history of humor—from fart jokes on clay Sumerian tablets all the way up to the latest Twitter gags and Facebook memes—that tells the story of how...

Fear and Loathing in Las Vegas author Hunter S. Thompson rocked the literary WD with his mind-bending style of Gonzo journalism. First published in 1966, Hell’s Angels is Thompson’s up-close and personal look at the infamous motorcycle ...

**One of NPR’s Best Books of 2017** “Petersen's gloriously bumptious, brash ode to nonconforming women suits the needs of this dark moment. Her careful examination of how we eviscerate the women who confound or threaten is cruc...

In The 50th Law, hip hop and pop culture icon 50 Cent (aka Curtis Jackson) joins forces with Robert Greene, bestselling author of The 48 Laws of Power, to write a “bible” for success in life and work based on a single principle: fear no...

Something has been going wrong on many college campuses in the last few years. Speakers are shouted down. Students and professors say they are walking on eggshells and are afraid to speak honestly. Rates of anxiety, depression, and suicide are risin...

NATIONAL BESTSELLER A Book of the Year Selection for Inc. and Library Journal“This book picks up where The Tipping Point left off." -- Adam Grant, Wharton professor and New York Times bestselling author of ORIGINALS and GIV...

In Inside Studio 54, the former owner takes you behind the scenes of the most famous nightclub in the world, through the crowd, to a place where celebrities, friends, and the beautiful people sip champagne and share lines of cocaine using rolled-up ...

Everything Bad is Good for You
by Steven Johnson

From the author of the New York Times bestseller Mind Wide Open comes a groundbreaking assessment of popular culture as it's never been considered before: through the lens of intelligence.Forget everything youâ€™ve ever read about t...