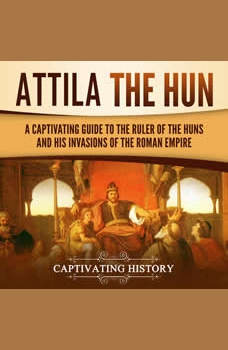 Attila the Hun: A Captivating Guide to the Ruler of the Huns and His Invasions of the Roman Empire

If you want to discover the captivating history of Attila the Hun, then pay attention...

In the popular imagination, Attila the Hun is among the most barbaric leaders ever. His warriors have the reputation of being ruthless, cruel, and bloodthirsty, as the Huns are believed to have been savages lacking any semblance of civilized culture.

The Huns raped and pillaged with abandon whenever the opportunity arose, and their raids into lands poorly protected by military outposts in the crumbling Roman Empire became legendary. The Huns under the command of Attila are thought to have been largely responsible for the collapse of the Roman Empire and the commencement of the Dark Ages in Europe.

In Attila the Hun: A Captivating Guide to the Ruler of the Huns and His Invasions of the Roman Empire, you will discover topics such as

So if you want to learn more about Attila the Hun, scroll up and click the "add to cart" button!