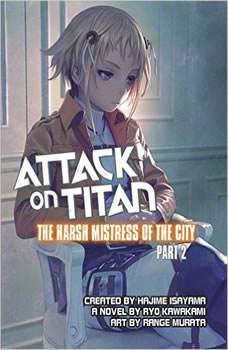 Attack on Titan: The Harsh Mistress of the City, Part 2

Shinganshina has been breached, and humanity has retreated to Wall Rose-for the most part. Quintra District, situated at the western end of Wall Maria, is holding out despite being hemmed in by the Titans on both the exterior and the formerly interior sides.

In this concluding half of this side story, Rita Iglehaut, acting commander of the local forces, struggles to turn her isolated hometown into something of a city of its own. Her draconian methods, however, shock the residents, not least Mathias Kramer, her childhood friend.