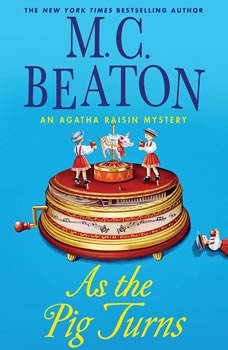 As the Pig Turns: An Agatha Raisin Mystery

The picturesque Cotwsold village of Winter Parva has decided to warm the post-Christmas season by roasting a pig in the town square. Agatha, always one for a good roasting, organizes an outing to enjoy the merriment. But as the rotary spit is placed over a bed of fiery charcoals and the pig is carried toward its final resting place, Agatha realizes that things are not as they seem ..."Stop!" she screams suddenly. The "pig," in fact, is Gary Beech, a policeman not exactly beloved by the good people of the village. Although Agatha has every intention of leaving matters to the police, everything changes when Gary's ex-wife hires Agatha's detective agency to investigate-and then is murdered too. With that provocation, how could any sleuth as vain and competitive (and secretly insecure) as Agatha do anything other than solve the case herself? A New York Times bestseller.